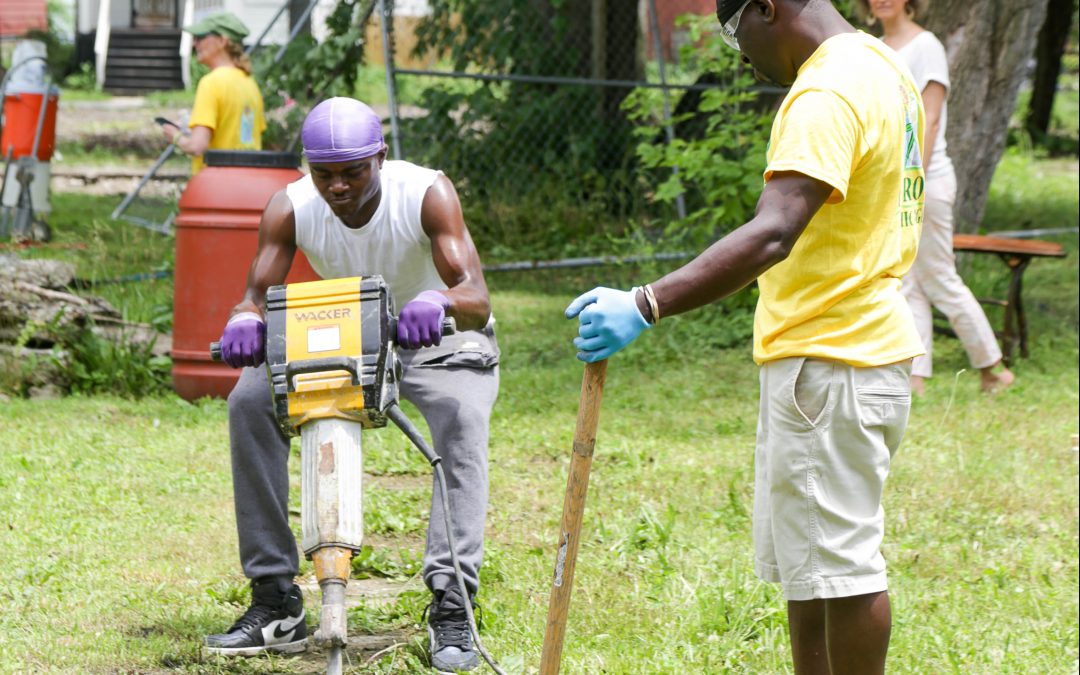 A few weeks ago, volunteers and neighbors came out to our Peace Campus to be involved in our Service Day and the official groundbreaking of our nature playlot. The event began with a centering activity where volunteers and community members joined hands and linked arms, as they called out their hopes for the playlot. Love, laughter, a treehouse, safety.

Alderman Raymond Lopez spoke at the groundbreaking, celebrating the change that the neighbors and residents have brought to the block, “Think back almost seven years ago, what this block was like, what that lot was like, what that house was like,” he said as he gestured towards the Peace House and the Healing Justice Court.

Residents and community members are overjoyed at this new development. Although the kids can play basketball on the Healing Justice Court, the children do not have many other safe play spaces, especially ones that will focus on nature play.

“I can see the vision, all the different pieces coming together”, Quentin nods as neighbors excitedly talk about the possibility of the treehouse. Although a treehouse was never in the original plan, neighbors started climbing up the two trees in the middle of the lot and soon enough talk of building a bridge between them solidified into a plan. 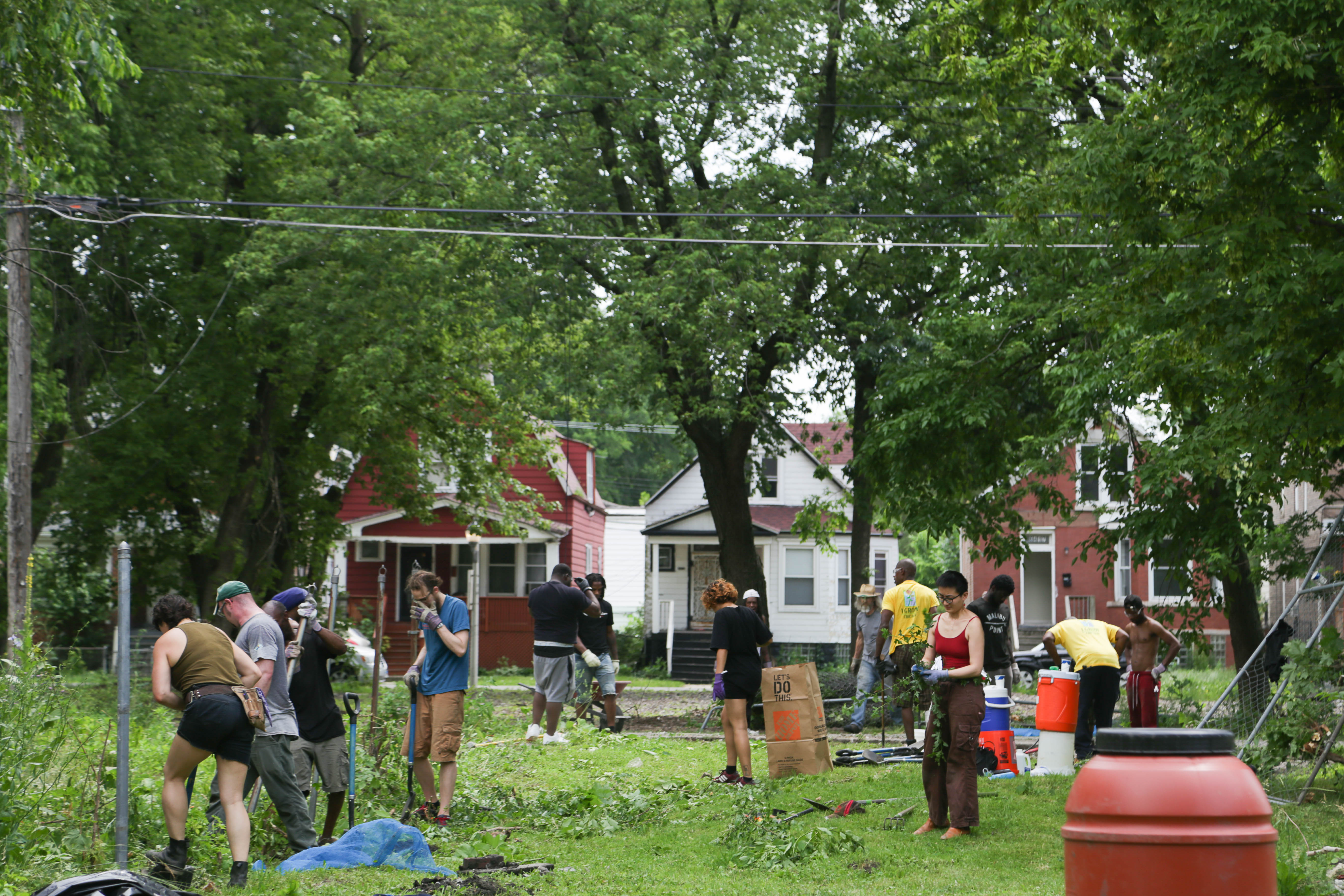 Status Update and Next Steps

“We broke concrete, we didn’t really break ground” Bryan Saner joked when asked how the first day of the groundbreaking went.

Bryan, alongside Erik Peterson and Lara Rosenbush are three local artisans who have been working with community members on designing the play space.

“From the moment we open our car doors, everyone was just activated to just pull everything out and just get right to work. Before we knew it, all the fences were down. Everyone broke into teams by themselves, we didn’t have to do much in terms of leading. We kind of learned from each other as we tried to figure out how to demolish to rebuild for the next steps.” Lara said.

The next major undertaking will be to build one solid fence along the alley on the east with a gate, the team is also looking to get trees from the community that had to be taken down, which will most likely be ash trees.. They are currently working with the alderman and the bureau forestry to get access to the wood, which will then be milled and turned into slabs.

“We would like to have something substantially completed by snowfall, but then I really believe that it will continue even after that. We want people to keep building things, to keep it growing. If people know how to put two pieces of wood together, they can just come in and do it themselves.”

“I kind of have a feeling that the end of this summer won’t be the end of making stuff for this park”, Erik echoes this sentiment, and Bryan continues “It will be nice that it evolves. I think we can do a few key things like make some benches and tables, features and tables, places for people to gather. And then there’s more of an evolution of what happens next, how it develops.” 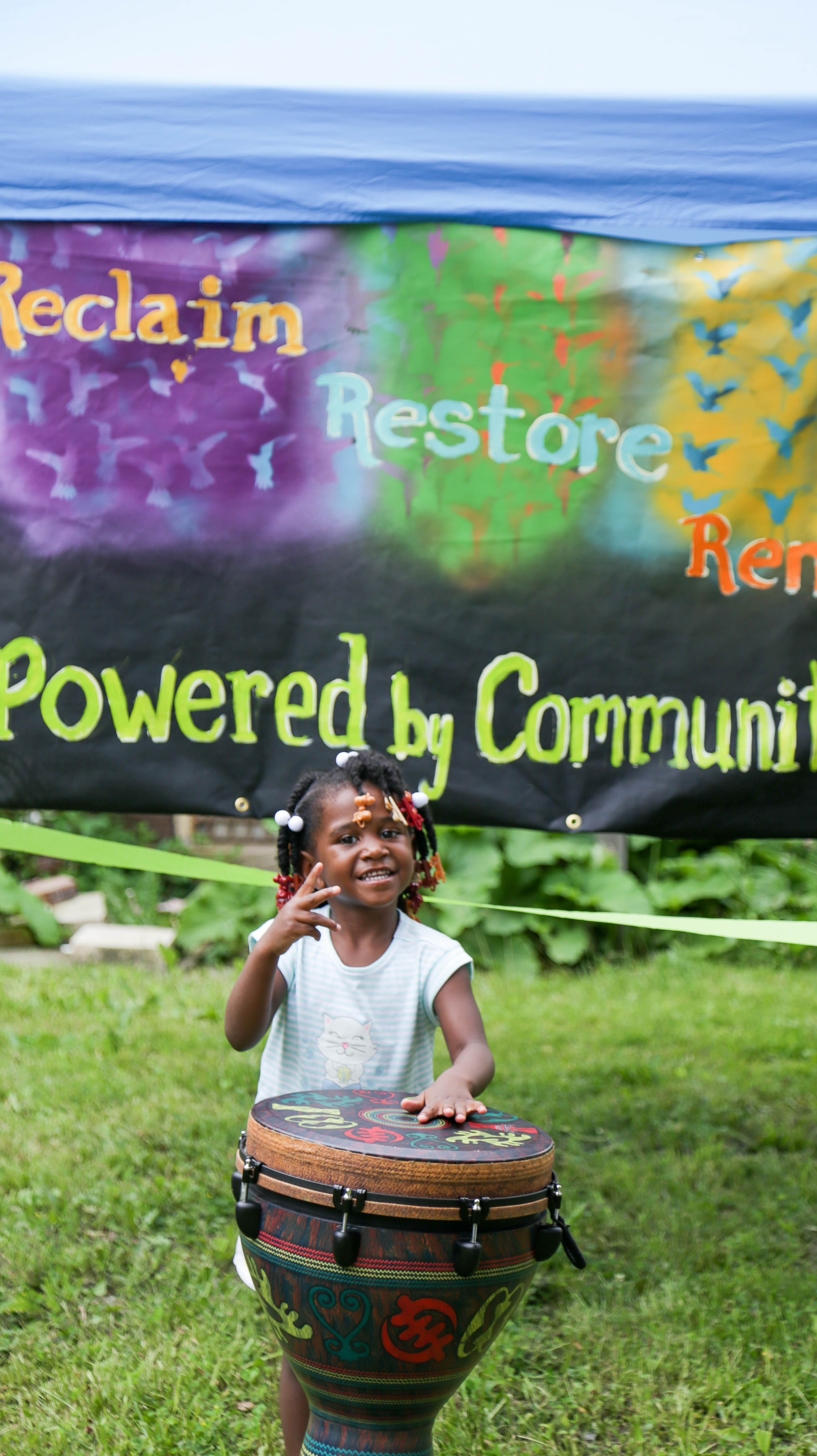