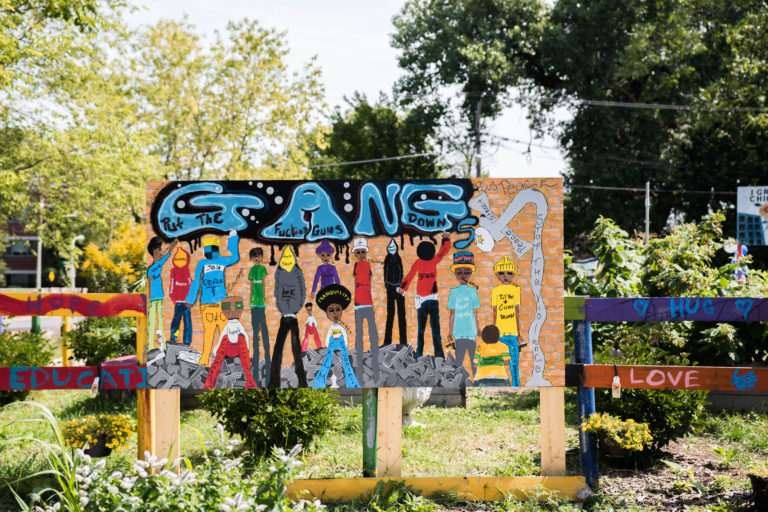 The longest 10 seconds of my life. Trauma I can never un-experience. Sounds that still ring through my head. And unfortunately, a situation that is normal for too many of the people living in Chicago’s underserved communities.

Around 4:30 pm on Friday, September 8th, we were getting ready to close the Peace House for the day and a volunteer artist needed help in our Peace Garden with loading cement bags into a car. I had walked down the block to ask some young men to help. A couple minutes later, a car pulled up to the corner and open fired on the men I had spoken with. I was about 20 feet away, in the line of fire. Our kids were just down the block, our neighbors were on their porches, and there were people in the garden. Someone got hit on the lower half of his body.

Once the shooting started some people hit the ground and others ran. I remember it lasting so long. I remember laying on the sidewalk doing my best to stay down and to move my body closer to the fence and the lavender plants. I also remember the chaos that ensued. We checked to make sure that everyone was alive– that we were “okay.” I remember my heart beating so fast that I had to take several long, deep breaths to even think about what to do. We ran to the Peace House to call 911. The police showed up in less than 3 minutes. Soon our street corner was filled with CPD cars and officers– many with their guns drawn, one carried an assault rifle. I was scared. Not for myself, but for the community that is forced to deal with violence on a frequent basis.

After watching video footage of the shooting I learned that the car had drove by while I was halfway down the block talking with some of the men that were later shot at. The young men were in a vulnerable position between two vacant lots. According to the police and one of the men I work with, the reason why the car didn’t shoot the first time around was because I was right next to everyone. A week prior we had a shooting about halfway down our block when there were children in the crowd. It broke my heart to hear a 5 year old who was close by the shooter tell me that he “almost got his head blown off” and that he thought he was going to stay with his dad in heaven. Violence and the trauma that comes from it can literally rewire the brain. We as a society must do better. People are suffering and gun violence has been normalized in the communities that are most affected.

October 2nd was International Day of Nonviolence. I woke up that morning to news of domestic terrorism in Las Vegas. Every morning I also wake up to Google Alerts of shootings in Chicago. This has to stop. How many more lives will be taken before we as a country realize that we must seriously address gun control? If I am asking the community I serve to be nonviolent then I cannot be silent about what I see and experience. Silence is violence. I tend to not share what I do at work for fear of transferring the secondary and primary trauma I experience to another person but I know that I am being selfish in keeping it all in. It’s also not healthy. I am not quite sure what this blog will look like, but I am committed to sharing my thoughts and experiences. This is also a form of self-expression and therapy. There is so much beauty in the world and I want to make sure that I appreciate it while also sharing the work I do to make the world a better place.